Pioneer staff share their top picks for COVID-19 stories highlighting useful resources, best practices, and questions we should be asking our public and private sector leaders. COVID-19 has overshadowed what was supposed to be Sunshine Week, but vigilance on behalf of open government is even more crucial during times like these, when the public has limited access. But government transparency is important at all times. Each year during Sunshine Week, Pioneer reviews some of its recent work to increase public accountability in Massachusetts government. Looking for quality literature and books to share with your children while we’re all at home for the foreseeable future due to COVID-19? Here are some excellent options that will nurture a love for great classic literature and enduring historical figures: Co-authored by Andrew Mikula and Greg Sullivan Everett’s Encore Boston Harbor has entered its third quarter of business with two pieces of good news. First, there has been renewed interest in the construction of a footbridge connecting the Orange Line to the shimmering resort casino, a major step towards improving accessibility and reducing traffic congestion in the vicinity. Second, USA Today named Encore as one of the best casinos outside of Las Vegas.   But there is also some bad news. The most recent Massachusetts Gaming Commission revenue report indicates that state revenue from Encore Boston Harbor will fall far short of the $201 million that the casino owner projected for fiscal year 2020 when it was vying for a […] If you regularly ride the MBTA commuter rail, you’ve probably experienced a number of delays, patchy service, limited parking, overcrowding, and outdated equipment. But some would-be riders have significant difficulty boarding the train in the first place at most stations – namely, the elderly, disabled, and otherwise mobility-impaired individuals.    The problem is that many of the system’s 143 station stops were designed in the 19th century, long before the Americans with Disabilities Act mandated accommodating people in wheelchairs. As a result, a 2018 MBTA report listed a paltry 36 percent of commuter rail stations as “fully handicapped accessible” and 24 percent of the stations as requiring riders to climb stairs to board a train. Another 40 percent are “partially […] 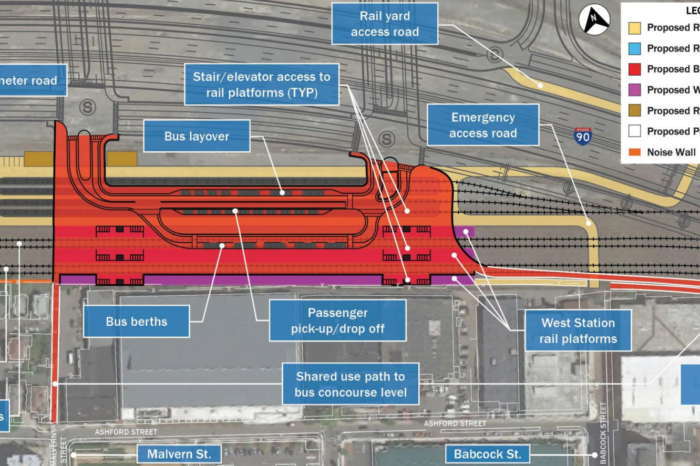 In 2014, MassDOT proposed the construction of West Station, a new transit hub in Allston-Brighton that would significantly improve the connectivity of Boston’s western suburbs with Cambridge and North Station. Using an old freight corridor called the Grand Junction Railroad, the project initially seemed like a neat work-around to the inevitably exorbitant costs and disruptiveness of the North-South Rail Link, at least for Framingham/Worcester Line users. Unfortunately, MassDOT’s recent designs for the station will potentially limit accessibility to new destinations and old ones alike.    Instead of a four-track ideal that would accommodate both inbound and outbound travel on each branch, MassDOT wants to limit local Framingham/Worcester Line trips to a single track to accommodate two express trains that existing […] In an Open Letter to the Massachusetts Governor, Pioneer Institutes presents its concerns about the I-90 Allston Multimodal Project, and its impact on those who will be most affected during the project’s construction Despite recent good news about declines in alcohol, traditional cigarette, and hard drug use among young people, it seems that retailers of these heavily regulated (or just plain illegal) substances aren’t going away any time soon. The number of Massachusetts bars and nightclubs – or, in the words of the Census Bureau, “places primarily engaged in preparing and serving alcoholic beverages for immediate consumption” – has wavered between about 700 and 800 since the late 1990s in a pattern that, amusingly (and probably coincidentally), seems countercyclical (see Figure 1).    Figure 1:  Source: Your-economy Time Series   However, more concerning than the trend in drinking establishments is the trend in tobacco stores, defined as “establishments primarily engaged in retailing cigarettes, cigars, […] Before the clock strikes 12:00 on December 31st, read our 12 great reasons to make a contribution or deepen your commitment to Pioneer Institute! The Pioneer Institute recently released a new index rating the transparency and accessibility of each state’s Statements of Financial Interest. SFIs are disclosures used to determine if elected officials and policymakers have potential conflicts of interest.   Pioneer’s new index finds that, among states with procedures for reporting SFIs, Massachusetts has the lowest raw score (15 on a scale of 100). Ironically, states that commonly rank among the most politically corrupt in the country – like Illinois, Louisiana, and New York – have index scores of 90 or higher.    Pioneer’s rating is based on 7 underlying criteria: whether the SFIs are available online, whether the form is electronically searchable, whether the reports are free for the public to access, […] Bob and Cara talk with Jason Bedrick, EdChoice’s director of policy, about New York’s controversial “substantial equivalency” proposal that would give the state Department of Education oversight of school curricula at yeshivas and other private and parochial academies.