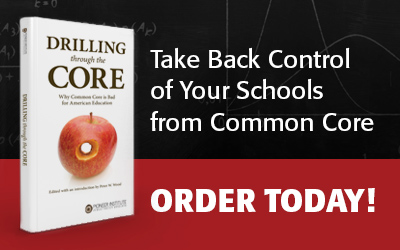 “Drilling through the Core: Why Common Core is Bad for American Education” (377 pp, Pioneer Institute, Boston, $9.95) BOSTON – The Common Core K-12 standards have gone from “inevitable” to “poisonous.”  A new book adds to the woes of Common Core’s supporters by bringing together academic critiques from over a dozen scholars who provide an independent, comprehensive book-length treatment of this national standards initiative.  The book arrives at a moment when popular support for the Common Core is declining.

Two national polls show widespread opposition; repeal and rebranding efforts are underway in numerous states; it has become toxic for presidential candidates; and the number of states participating in Common Core-aligned testing consortia has dwindled.  The Common Core standards have lost credibility with the general public, parents, and teachers.

Pioneer Institute’s timely new book, Drilling through the Core, puts into a single volume the results of five years of research.

Common Core standards were developed by a group of Washington, D.C.-based education trade organizations and pushed on the states by the federal government through the Obama administration’s Race to the Top initiative.

“The impact of the research in this book illustrates the power of ideas in public debates,” said Jim Stergios, executive director of Pioneer Institute and author of the book’s preface. “The key chapters highlight Common Core’s inferior academic quality and illegal federal government overreach. Its unfunded mandates impose prohibitive costs on states and localities, even as the money is spent driving an agenda that aims for mediocrity.”

Drilling through the Core examines Common Core’s dramatic reduction of classic literature; its failure to prepare students for college courses in science and math; and its flawed, “cold-reading” approach to historical documents.  The book also refutes the claim that adoption of Common Core was “state-led” and “voluntary.”  The federal government has illegally spent $360 million to fund two Common Core-aligned testing consortia.

The introduction by Peter Wood to Drilling through the Core summarizes the debate, and serves as an appropriate prelude for the scholarly chapters by national experts on the academic, fiscal, and legal features of these controversial standards.

“The Common Core is another in a long line of failed attempts to reform American education by wresting control away from local and state authorities,” said Dr. Wood, president of the National Association of Scholars. “The Common Core beguiled both liberals and conservatives with its promise of bypassing both public debate and close examination of the details.  In the end, those efforts to avoid public discussion proved to be its weakness. The scholars featured in this book over and over again reveal fatal mistakes that would never have occurred if the Common Core’s proponents had trusted the American people to make their own decisions.”

Three chapters examine the English language standards and how they shape student learning generally, in the area of poetry and in the discipline of American history. Three additional chapters focus on the mathematics standards, comparing Common Core’s inferior academic quality to math standards from various high-standards states.  Additionally, they examine whether these national standards prepare students to undertake college work in science, technology, engineering, and math.

One chapter assesses whether the Common Core and the process by which states adopted the standards violate federal laws. A final chapter estimates that the transition to Common Core-aligned standards will cost nearly $16 billion.

Pioneer Institute will launch the new book at a National Press Club event in Washington, D.C., on Monday, September 28th, at 9 a.m.