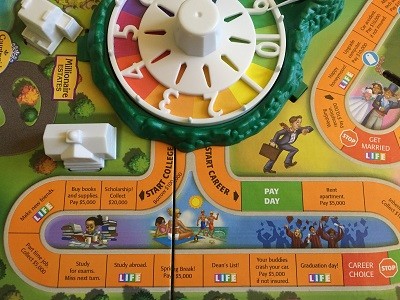 Back in 2005, the Milton Bradley Company launched a new version of the classic The Game of Life.  While similar in most respects to the game most of us grew up with, the updated version reflects today’s financial realities. Namely, you can choose a career and start with a salary or you can choose college and start out $100,000 in debt.

College costs have skyrocketed over the last couple decades. Average tuition for a private, four-year institution has increased by more than one quarter in just the last 10 years. What’s more, this is not a symptom that is unique to private colleges. The Pioneer Blog has documented the University of Massachusetts’ tuition increases over the years for both in-state and out-of-state students. Tuition hikes come with long-term economic consequences.  As almost every student, parent, and bank knows, student loans have become the norm in the game of life, with 70 percent of students accumulating an average debt of $37,172 by the time they graduate. An even scarier statistic is that total U.S. student loan debt has reached over $1.3 trillion, dwarfing the nation’s $733 billion credit card debt.

Federal student aid usually comes in the form of guaranteed loans, with below-market interest rates. The Department of Education’s application for the various loans and grants details a student’s household financial picture. Based on the application, the federal government determines the size of the loan or grant. Like many states, Massachusetts has a smaller-scale, version of the process. The Massachusetts Educational Finance Authority (MEFA) offers fixed and variable interest rate loans to both Massachusetts residents and out-of-state students studying in Massachusetts. As tuition rates continue to rise, these institutions process larger and larger loans to help students keep up with escalating college costs.

Do these agencies fuel the constant tuition hikes? It is already accepted that tuition hikes reflect a mixture of cost factors, such as the cost of amenities, faculty and administrative salaries, capital costs and decreased federal/state funding to public universities. Moreover, colleges are well aware that tuition rates tend to reflect a school’s level of prestige.

However, in 1987, President Reagan’s education secretary, William Bennett, coined “the Bennett Hypothesis.” His argument was that the availability of student aid enables universities to artificially hike prices. Since college administrators count on the government guaranteeing student loans, they understand that tuition increases tend not to deter students from accepting the available slots at their schools. Although critics claim no correlation between financing availability and tuition hikes, there are plenty who support Bennett’s theory

The National Bureau of Economic Research found that student aid was the main factor behind tuition increases between 1987 and 2010. In fact, this study found that for-profit institutions that participate in the federal student aid program charged 78 percent more than those that do not. Likewise, a 2016 staff report by the New York Federal Reserve Bank said that the correlation between tuition and student aid on average accounts for 65 cents per dollar of tuition increases.

On the state level, we can see this hypothesis in action. Over the last six years, MEFA loans have increased by about $50 million. While MEFA’s payroll and other expenditures (see the “Payments” and “Payroll” columns in Figure 1 below) are on the decline, loan amounts are rising steadily. Massachusetts Open Checkbook

Figure 1: Breakdown and Percentages of MEFA Expenditures from 2010 to 2016

Tuition at state schools like University of Massachusetts have kept up with increases in MEFA loan amounts. This is not to say that federal and state loans should be eliminated. Rather, college tuition rates need to be capped so students and families can afford an education without drowning in debt.

Finding a solution that will not hurt students’ educational aspirations is paramount. Some economics scholars suggest reducing federal/state aid and forcing students to depend on private lenders like Sallie Mae, essentially treating student loans as free-market commodities. The idea is that it will decrease demand for college, thus halting the tuition increases.

However, critics of this solution say that it will only increase the gap between those who are wealthy enough to afford college, and those who are not. President Obama recognizes this problem between tuition and loan increases, and proposed a plan in which financial aid eligibility is tied to student performance.

Perhaps Bennett himself offers the most viable option. His recommendation is that the federal government should focus its Pell Grants towards students on the lowest end of the financial spectrum, while offering a majority of its guaranteed loans to middle-class students. In effect, many people would not be able to afford the sky-high tuitions, pressuring colleges to adjust their prices. Maybe the economic development bill that is currently pending in the Massachusetts Legislature, which calls for tax deductions for families who put money into a college savings account early, will also reduce families’ dependence on state/federal loans.

Whatever happens, the class of 2020 will follow in the footsteps of its immediate predecessors and in many cases have to start their game of life with a diploma in hand, and a debt collector trailing close behind.

The Battle over Logan Airport—Will TNCs Prevail?
Scroll to top