Paul Levy has a compelling post over at his must-read blog, Not Running a Hospital.

It will serve as the first post in an occasional, but ongoing, series documenting what the real impact of the ACA means in Massachusetts. For the last three years, our state leaders have been promising that the ACA will mean only improvements for the citizens of our state. Now reality is starting to set in…

Do you have a personal story about the ACA you would like to share? E-mail me the details… josh [at] pioneerinst.wpengine.com

I am happy to keep any story anonymous.

Ross Douthat writes in the New York Times that Americans will soon be able to get “a real look at what Obamacare is selling them.”

What will they find? One way to understand what is being offered is to think in terms of three “mores.” Insurance à la Obamacare will be more expensive, more subsidized and more comprehensive than what was previously available on the individual market. 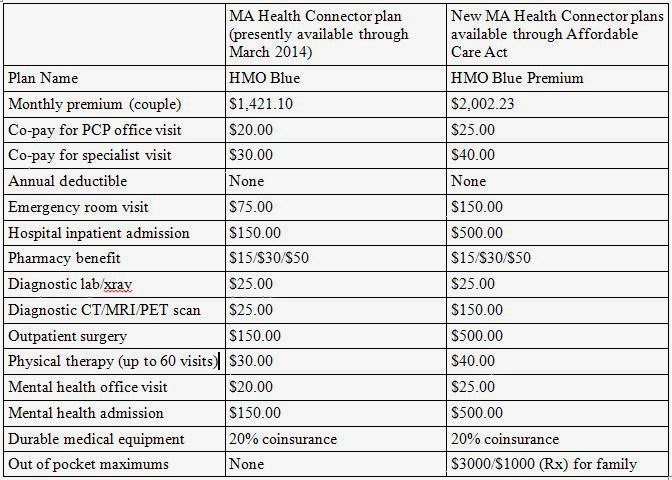 To summarize, for $600 more per month, my co-pay for almost everything goes up. My share of an inpatient admission or outpatient surgery goes up 233%; a CT or MRI goes up 500%; and ED visits are double the cost.
Now, I do get the benefit of an out-of-pocket maximum of $3000.  But I will pay $7200 extra for that protection. To break even, I would have had to spend $10,200 in out-of-pocket items under the Massachusetts plan.

I know I could downgrade to a lower level of insurance and reduce my monthly premiums, but then other items would also change in price and availability.  This is the plan that best meets our needs.

Douthat noticed the same pattern in his home state of Connecticut. “There the ‘more expensive’ part of the new regime is readily apparent.”  He believes that the higher rates are “because insurance companies now have to take customers with pre-existing conditions, which drives everyone’s rates up. But they also bite because buyers are getting more insurance than the older system’s cheapest plans offered.”

Not so here in Massachusetts, where pre-existing condition exclusions have been outlawed for years and where–as you see–we are not getting more insurance than the older system.

I think the explanation for this uptick in cost in Massachusetts has to do with the group and individual definitions and rating factors that BCBS has to use under the ACA, so I’m not blaming them.  And actually, their premium plan is less expensive than those offered by other insurers in Massachusetts, so some competition seems to exist.

I’m also happy to pay my fair share.  In particular, I have no problem at all with having my tax money used to help subsidize those who can not afford insurance.

But, jeez, couldn’t you have kept my monthly premium rate increase to something less than 40%?

Paul has written a follow-up upon being instructed to change plans, and save some money, but he still finds:

I am still worse off under the Affordable Care Act than I was under the Massachusetts plan. My premium has gone up $220 per month (or 15%), and I will likely spend another $1000 covering the deductibles.