During President Obama’s Boston visit to talk about the ACA and the Massachusetts experiment, it is important to remember some context. Here are a few pictures that help to illustrate the successes and failures of Mass reform.

However, caution should be used when expecting the same results under the two laws, since the laws are different, and Massachusetts is not the same as Arizona, or Texas, or Alabama, or Ohio, or etc…. For example, read five reasons why employer behavior will not be the same under the ACA as it was under RomneyCare, Part 1 and Part 2.  But before we begin, let’s pause to recognize that the ACA will impact Massachusetts in some significant ways.

In fact, the Democratic legislature and Governor have asked for a waiver from certain provisions. While an outright waiver has not been granted, there have been multiple “grace periods.”

The impacts are just starting to be felt. For example, ACA regulation changes will raise premiums for 60% of individuals that receive coverage from their small employer, as high as 97%. Source: Division of Insurance of Massachusetts

And on the tax and payment front:

Note: The data is not always up-to-date due to when the graphics were created, but the trends stand. Most graphics taken from The Great Experiment: The States, The Feds, and Your Healthcare. Residents still show up in the ER far too often. Nearly half of all visits are avoidable, and those on subsidized coverage are much more likely to visit the ER when compared to the privately insured. The cost of an ER visit has gone up 35.6% between 2006 and 2010. 6)      Wait Times Remain an Issue, Even with the Highest Per Capita Population of Doctors 7)      Hundreds of Millions Still Being Spent on “Free Care”

While there was a slight decrease in the amount of “uncompensated care” or free care following reform, there has been a steady climb up in recent years. Remember, this is with 97% coverage. The state has not identified the reason for the steady increase. 8)      Premiums Still Going Up and Up. Most Expensive in the Nation.

The law has done very little on cost reduction.

It is very important to remember that Massachusetts has had regulations on the books to prohibit denial of coverage for pre-existing conditions (guarantee issue), and to restrict the amount older and sicker people can be charged (modified community rating) for coverage since 1996. The 2006 reform did not implement these, the ACA does, and is causing premiums to rise in many states. 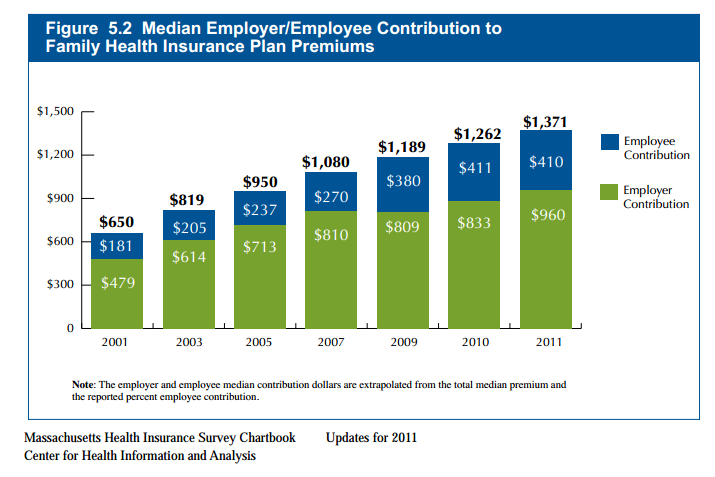 Deductibles are also on the rise in the state, which is a big departure in the HMO-heavy landscape that has dominated the Bay State for decades. The decrease has continued to get worse over the last three years. The growth is partially due to: the economic downtown, the Massachusetts reform, and the lack of program integrity by the current Administration.

Under the ACA, the numbers will become even more lopsided as 100,000 will be transferred off the subsidized Commonwealth Care onto Medicaid, and 80,000 new people (many with private coverage now) will be added to Commonwealth Care. This is a result of the ACA allowing subsidies for those making between 300-400% FPL.

12) Fewer Employees are Taking the Offer of Employer Based Insurance.

Supporters of the law often cite the 2-3% increase in the number of employers offering insurance in the state as proof reform doesn’t crowd-out private coverage. But what they never talk about is that an offer of coverage is very different from the acceptance of that offer. 67% of employees took their employers’ offer of insurance in 2001, 63% in 2003, and now it is down to 50% in 2011. 13)   The Cost of the Reform Has Been Very High, For Government and the Private Sector

The Massachusetts reform has been very expensive, and the federal government (i.e. taxpayers) have paid handsomely for it. It has also eaten up state resources: FY13 Healthcare Spending Tips 50% of State Budget ($16.5B) The state has cut benefits for Medicaid due to ballooning costs, and raised the cigarette tax three times. The state also just raised taxes again close to $500 million for transportation, but budget observers believe it is mainly due to healthcare eating up those state dollars. There has never been a comprehensive estimate of the additional cost of the law on private companies, but just ask any small business owner over 11 FTE in the state, and you will get an earful.

14)   The Connector (the Massachusetts state-based exchange), has Failed to Attract Non-subsidized Business. These are just a few of the snapshots that tell the story of Massachusetts reform.

A First Step Toward Retiree Healthcare Reform, But Much More is Needed
Scroll to top