The Future of Drone Surveillance

At some point or another everyone has heard the quintessential buzzing of a drone, otherwise referred to as an unmanned aerial vehicle. Most people know of drones and drone surveillance as it relates to the military, but small-scale, remote control operated drones are becoming equally as prominent in the everyday household. Ordered online at next to no cost, these drones are capable of a great deal of surveillance that can enhance the security of every home and commercial property. Drone surveillance will bring with it many future applications including:

Professional security system installation can capitalize on security innovations with drone security. With home security systems, drones can be coupled with motion detection systems. For example, a home with cameras can determine whether someone is on the property who shouldn't be, or trying to break into the house, but only within the field of view offered by the camera.  More expensive systems might include swivel mounted cameras that can track movements across the property, but there will always be areas where cameras have blind spots. Drones, however, can be launched by an individual sitting in the security office of a building, or sitting on the couch of their home, tracking the goings-on around the property at all times.  Larger properties with sprawling multi-acre homes might find the drone surveillance is a significantly more affordable alternative to dozens of cameras much the same as commercial property with large plazas or multiple buildings on the compound can use drones to randomly survey the entirety of the compound and follow individuals who might be accused of theft on their way out of the building until such time as a security guard can catch them.

Drones have already made a name for themselves with fire surveillance. One of the biggest issues when fires take place is the ability of aircraft containing fire retardant or water to navigate the smoke and find the location for their drop point. Shifting wind can often inhibit this visibility making it difficult for planes to land on their mark. The problem here is that planes carrying water or fire retardant are prohibitively expensive and typically come out of an emergency budget at the state level or federal level. Each time an airplane lacks sufficient visibility to locate the source of a fire, the extent of a fire, whether break lines are holding, or where to make an accurate drop, it can cost thousands of dollars and hours for the plane to leave, restock, and come back. As such, drone security and surveillance offers a viable, time-saving and potentially life-saving alternative where by drones can locate the source of the fire without putting lives at risk, verify the direction the fire is traveling, cut through the smoke to see which homes have been tackled with fire retardant or not, and much more. Drones aren't just used in fire surveillance, they have the potential for applications with floods, to verify where victims of flood may still be stranded and in need of evacuation, and the same type of surveillance for the aftermath of tornadoes or earthquakes. 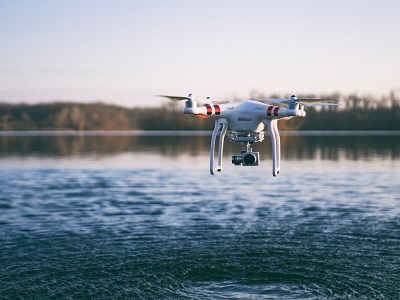 Drones have been integrated into border security efforts as well. Border patrol agents have difficulty with the time gap between calls about illegal crossings and the ability of a group from border patrol to reach the area in question. Tall and dense plant life can further inhibit subsequent searches, but small drone aircraft have become the solution. This aircraft can be deployed as soon as calls come into the location in question and follow those who are crossing illegally, tracking their movements until such time as border patrol agents can arrive. Drones offer better air support no matter how big or small they are.  Border patrol gets a better bird's-eye view with the systems, compensating for the delays that are naturally associated with a human response, and helping in areas where staff is undermanned. Hundreds of these drone systems are already in effect in the United States alone for border security with eventual plans to add 460 drones to regularly patrol the border in areas where offense doesn't exist or where illegal passes are most common.

Signs of Growth in Several Gateway Cities
Scroll to top