Executive session is where local governing boards interview police chiefs and school superintendents, negotiate with unions, discuss litigation, talk about misconduct by town employees, and conduct other delicate business that is kept temporarily private for legitimate reasons. Once the purpose of the meeting is resolved, the minutes are supposed to be reviewed by the town board or city council, and any minutes not exempt under the Public Records Law are supposed to be released.

The goal of my project – the Closed Meeting Crash – is to make the inner workings of local government more visible by obtaining five years worth of executive session minutes from all 351 municipalities in Massachusetts. So far, I’ve requested Bristol, Plymouth, Middlesex, and Barnstable counties – a total of 114 cities and towns. As it turns out, getting several years of executive session minutes from cities and towns isn’t easy – but it would be if each municipality kept up with reviewing and releasing non-exempt minutes regularly.

If a city council or board of selectmen neglects to review and release all non-exempt executive session minutes for five years, of course it will take hours of work by administrative staff and, possibly, lawyers. That’s why it’s supposed to be done regularly. 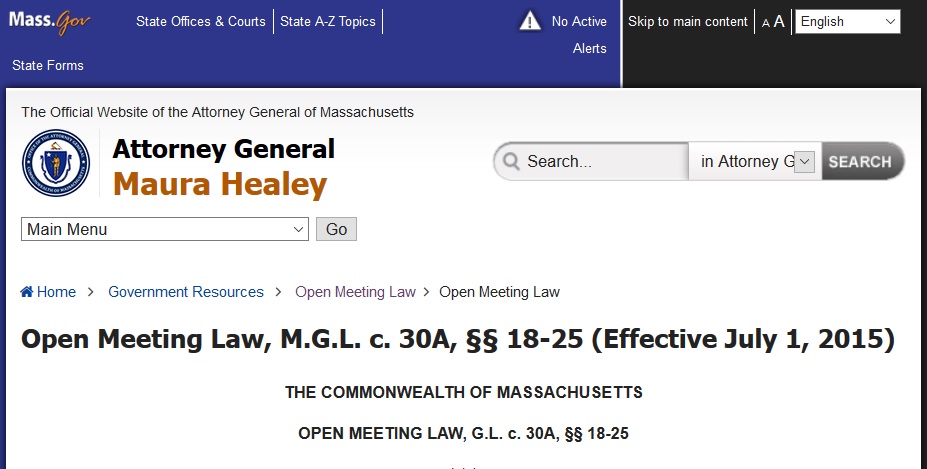 According to the Massachusetts Open Meeting Law:

“The public body, or its chair or designee, shall, at reasonable intervals, review the minutes of executive sessions to determine if the provisions of this subsection warrant continued non-disclosure. Such determination shall be announced at the body’s next meeting and such announcement shall be included in the minutes of that meeting.”

One of the issues here is that “reasonable interval” is open to interpretation – but for the sake of argument, let’s say that five years is not a reasonable amount of time for a governing body to shirk its duty to review and release the minutes of the meetings where some of its most consequential business takes place.

There are towns that charge a small, arguably reasonable fee such as Brewster ($3.25) and and Wareham ($30.56). The most expensive set of minutes so far has come from (or rather, hasn’t come from) Middleborough, a small, rural town in southeastern Massachusetts that wants $759.36.

Other towns that expect people to pay ridiculous sums of money for the town to perform the work it should have been doing this whole time include Lincoln ($236.90) and Pepperell ($255.53). But at least those towns bothered to respond – eighteen towns haven’t, including Abington, Hanson, Hingham, Hull, and Norton.

Twenty-eight towns have released minutes free of charge with varying degrees of redaction, including Mashpee, Westford, and Townsend. 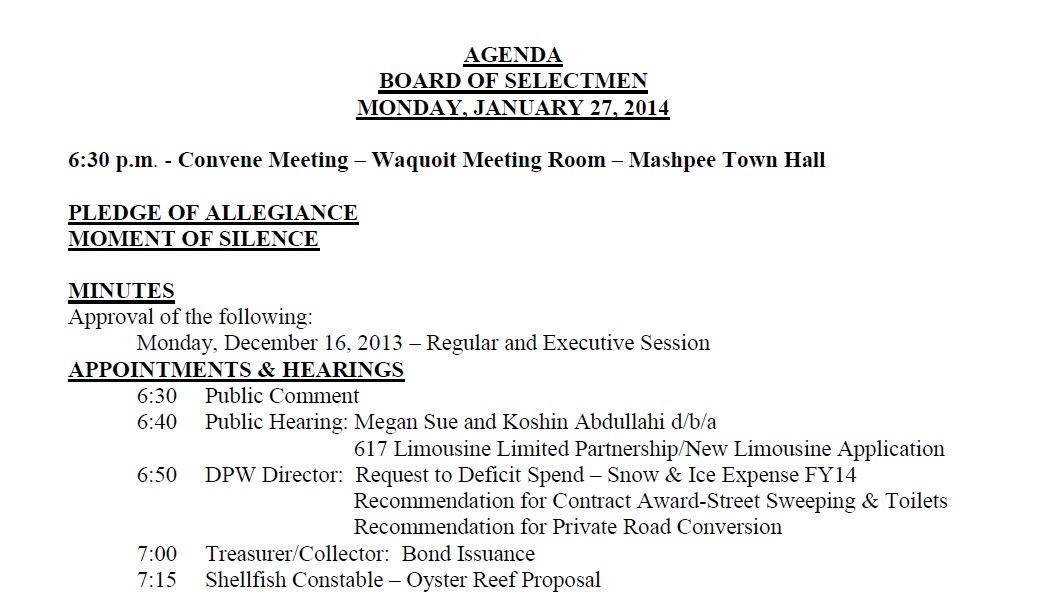 The quality of the records is questionable in some cases, in particular for the town of Ashby, which provided handwritten minutes. Before releasing the minutes, Ashby Town Administrator Robert B. Hanson warned me that “the executive session minutes you have requested exist only in handwritten form (and sometimes in execrable handwriting),” a statement that could not be more true.

In addition to being difficult to read, the minutes don’t reveal many details about what takes place during the meetings. On March 8, 2011 for example, “Selectmen discussed the changes from the interim chief contract to permanent part time chief contract.” There’s no insight into the Board’s discussion, no notes about any reservations, no disagreements elaborated upon. While the back and forth between a governing board over the contract of the town’s top law enforcement official may not be as important as the contract itself, the discussions can be illuminating and should be recorded with the idea of eventual public consumption in mind.

Then there is the town of Maynard, which seemed to have misplaced its executive session minutes after a new town administrator took over in 2013 – but managed to find those minutes the very same day they said they had no record of them after being reminded that the Board of Selectmen is legally required to keep these records, not the Town Administrator. 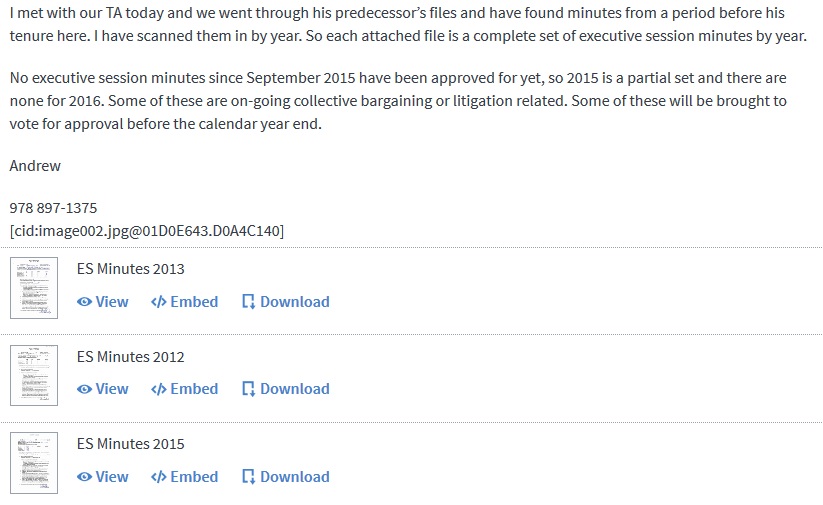 Some towns were able to provide all the minutes requested in a matter of days at no charge, because they review and release the minutes as part of their natural course of doing business as an elected public body. The town of Concord provided five years of executive session minutes free of charge just a week after my initial request, and the town of Halifax simply directed me to its website where it posts executive session minutes regularly, an exercise in transparency that feels uniquely jarring in Massachusetts.

Executive session transparency is totally doable, so why isn’t every city and town on board? Any person should be able to walk into their town or city hall, or send a letter or email, and get this information for a reasonable price, if not for free. A common argument that came from opponents of Public Records Law reform in Massachusetts was that it would place an undue burden on small towns. In the case of executive session minutes – just one small facet of public records – the towns make the process of reviewing and releasing these minutes more difficult for themselves by allowing large backlogs to build up. Record maintenance in small towns can’t be honestly framed as a burden – it’s just part of the job.

MuckRock’s Caitlin Russell has worked as a reporter for a number of news outlets in eastern Massachusetts since graduating from Suffolk University in 2011.

https://pioneerinstitute.org/wp-content/uploads/logo_440x96.png 0 0 MuckRock https://pioneerinstitute.org/wp-content/uploads/logo_440x96.png MuckRock2017-02-06 15:19:352017-02-06 15:19:35Why do Massachusetts municipalities make meeting transparency harder than it has to be?
Ensuring a secure financial future for older adults