Football fans across the country wait in anticipation for the start of the 2022 season which is right around the corner. The UMass Minutemen’s first game is on September 3rd against Tulane University. The Minutemen are a part of the NCAA Division I Independent Schools, but a fact college football fans may not know is the salary of head coaches.

From 2018 to 2021, the head coach of the Minutemen was Walter Bell, who according to Pioneer Institute’s MassOpenBooks, had a salary of $652,866 making him the seventh highest paid employee in the University of Massachusetts system in 2021. Bell was also the seventh highest paid employee at UMass in 2020 with a salary of $618,683, and in 2019 Bell was the eighth highest at $628,693. In total, Bell made over $1.9 million in salary during his tenure at UMass despite compiling a record of 2-23 for his three seasons as head coach. Bell’s record led him to be fired by UMass in 2021 and, according to MassLive, Bell’s initial contract entitles him to a $937,500 buyout. Including Bell’s salary and buyout, he will have received a total of over $2.8 million over his career at UMass.

Last year, UMass replaced Bell with Don Brown, who coached the Minutemen from 2004 to 2008, leading the team to the NCAA Division I subdivision championship game in 2006. UMass hopes Brown can return the Minutemen to their former glory and gave him a $700,00 base salary plus $100,000 annual deferred compensation, according to MassLive.

Similar to Walter Bell, Edsall had a poor record of 6-32 with the Huskies and was let go from the program. Since his contract ends in 2023, Edsall received his full $1.25 million salary as a buyout. Edsall was the third highest paid employee in Connecticut in 2019 and made over $1 million more than Bell that year. Even when you compare Bell’s highest yearly salary, $652,866, with Edsall’s lowest, $987,119, Edsall still made over $300,000 more than Bell. 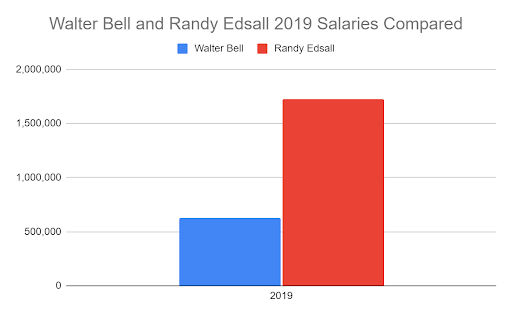 Both teams have hired new head coaches for the 2022 season. The UConn Huskies hired the former coach of the NFL’s Seattle Seahawks and Atlanta Falcons, Jim Mora, with a five year contract promising him $1.5 million in his first year with the ability to earn an additional $200,000 through incentives. It is clear that UConn spends far more on its head football coach than UMass does, but does that make UConn’s football program better than the one at UMass? That question will be answered when the two rivals face off on November 4th at Pratt & Whitney Stadium at Rentschler Field in Hartford.

The Second Largest Public Construction Project in MA is to give Logan International...
Scroll to top