Over the past few years, something unusual has quietly happened when it comes to public access: Small changes for the better. But while legislation passed by the House includes some great and much needed improvements – it fails to address, and in some case worsens – Massachusetts public records law’s problems, leaving the state dangerously behind its peers.

It’s worth acknowledging what has gone right in the Bay State.

For one, the results of the past year’s worth of public records appeals are now posted online by the Supervisor of Public Records. This is a tremendous resource for requesters and agencies, and a much appreciated policy change from an office that once claimed it didn’t keep an appeal log.

Over the summer, Governor Charlie Baker’s office also took strong, voluntary steps to open up access to state agencies, reducing and waiving some fees and bringing some much needed consistency and attention to the process that has been lacking for years.

Both these efforts are laudable and show that improvement is possible. Now it’s up to the legislature to make sure real reforms happen in the state that ranks among the worst in responsiveness.

Unfortunately, the current bill passed by the House does not offer the reforms needed to bring the state to where it needs to be to ensure access and accountability for and to the people.

Chief among the issues is giving the law teeth. For years, there has been almost no enforcement of the Supervisor of Public Records rulings from the Attorney General’s Office. Attorney General Maura Healey took a positive step in enforcing a recent SPR ruling, but it was the first case that was enforced in five years – and no enforcement have been publicly reported since then.

Instead, those seeking access to public materials are forced to litigation. The new legislation finally offers the possibility of recouping attorney’s fees, a standard in many states, but even that remains discretionary and up to the courts, and requesters in this state have found that what is discretionary given is almost never given. 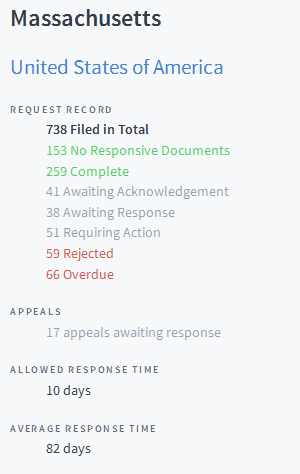 What’s worse, however, is that the law sets an unbelievably low bar for the timing of responses to requests: 60 days for state agencies and a staggering 75 days for local agencies.

Agencies are then allowed to ask the Supervisor of Public Records for an even longer period to respond.

Waiting two months and more for public data is, unfortunately, already the norm in Massachusetts, even though the law stipulates a response within 10 days.

But slowing access to information – which can often be vital to protecting the safety of the public – flies in the face of the transformations happening in every other facet of modern life, where more information is being made instantly accessible in almost every realm.

Letting agencies off the hook on the speed of public records access gives them a perverse incentive to continue to adopt antiquated technologies, an excuse they should no longer have in 2015. Indeed, one of the more troubling aspects of the House-passed legislation is that it allows agencies to outsource – at almost unlimited cost – access to their own records, a troubling precedent that could provide an easy “backdoor” exemption open to almost unlimited abuse by agencies seeking to keep their data away from public oversight:

The public records law includes a lot of substantive improvements, such as bringing the cost of copies to a reasonable 5 cents (some agencies routinely charge a dollar or more per page) and the aforementioned ability to recoup attorney’s fees. But it also brings with it troubling new compromises that, if the Bay State is truly to be an informed democracy accountable to its citizens, must be fixed.

Michael Morisy is the Co-Founder of Muckrock.com, an organization which facilitates public record requests and serves as an independent news source covering government transparency issues nationwide.

Image by Kevin Rutherford via Wikimedia Commons and is licensed under CC BY-SA 4.0

What is the Lawn on D Costing Us?
Scroll to top