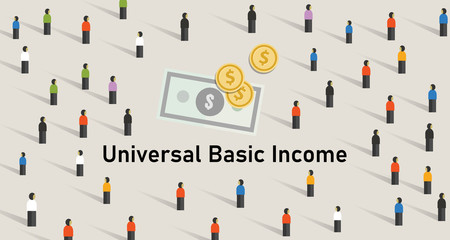 With the cost of living on the rise, inflation eating away at the average American’s paycheck, and an economy that’s generated fierce debates about inequality and poverty, many have called for systemic reforms and even more radical  changes.

Some have embraced what’s called a universal basic income; others not so much. So what is UBI? How does it work in practice? What do the researchers think of it?

First proposed by Thomas Spence in the 18th century, UBI is a redistribution program in which all adults receive a regularly occurring stipend; think of an earned income credit for everybody. The concept drew attention in England during the 1920s, resurfaced in Western Europe in the 1980s, and picked up steam in the U.S. during the 2016 election campaign.

UBI plans differ from proposal to proposal, but one common characteristic is that there would be minimal or no requirements for receiving the money. Aside from this, plans differ greatly. For instance, one of the biggest differences is whether cash payments should replace existing social welfare programs. The end goal for such a system varies, though. For some, it’s poverty alleviation, and for others it’s to mitigate the implications of automation in the job market.

Where’s it been done?

In the United states, very few UBI experiments have been implemented, the majority of which were small-scale trials.

Alaska is a popular exception. Since 1982, Alaska has distributed annual checks, ranging between $1,000-$2,000 to residents; all financed by the state’s oil revenues. But the system itself has no actual long-term purpose, and economists have determined that the dividend had no effect on overall employment. But it did have an effect on household fertility, with an NBER study finding that the Alaska Permanent Fund Dividend increased the fertility rate among women aged 15-44 years by 13 percent.

A newer program is the Compton Pledge, a guaranteed income experiment that has been distributing recurring cash relief to low-income residents in the city of Compton for the last two years, although there hasn’t been much data published on the program’s effectiveness.

Arguably the most comprehensive control trial study came from Finland, with the results showing only a small increase in employment, but a huge boost to well-being.

Opponents of UBI have cited many issues with such a program, but the most frequent are:

For many, the manner and implications of how a UBI is funded is of concern. Many contend that the economic stimulations that such a system provides comes at the cost of increasing the federal deficit, defunding other social programs, or increasing inflation, which would lead to workers’ wages buying less than they did in a pre-UBI world.

There’s been pushback on this critique though. For some, UBI seems completely affordable.

In a paper by University of Michigan’s Jessica Wiederspan, Elizabeth Rhodes, and Luke Shaefer, they concluded that a negative income household based UBI, set at the poverty line, with a 50 percent phase out rate would only cost around $219 billion annually.

The Wiederspan, Rhodes, and Shafer paper estimates differ drastically from other estimates, though. For instance, Ray Dalios’ Primer on Universal Basic Income study asserts that the program would cost taxpayers nearly $4 trillion a year under a traditional UBI model (one that doesn’t phase out as you earn more income).

Others believe earned income is the biggest motivator for productivity, and without it, the incentive to work is removed. As Professor Wyplosz of International Economics at the graduate institute in Geneva puts it, “if we pay people, unconditionally, to do nothing… they will do nothing.”

But some people aren’t totally bought on the idea that UBI reduces work. After conducting a review of unconditional cash programs for the Roosevelt Institute, University of Chicago economist Loana Marinescu found that reductions in work during the experiments of  Negative Income Taxes in the U.S and Canada during the 1970s, Alaska’s Permanent Fund, and the Eastern Band of Cherokees were minimal. The Cherokee case saw no effect on work, the Alaskan case saw no overall effect on the share of people working, and the negative income tax experiments saw no statistically significant reduction in work, except for the Seattle/Denver experiment, one of the last large-scale experiments during the 1970s to better understand the implications of negative tax income programs. In the end, married men in the experimental group were five points less likely to work during the year than the control group. In addition, the study concluded that families who were offered larger grants worked less overall.

Despite the findings of these reviews, opponents still argue that the programs above aren’t what actual federal or state UBI’s would be.

3) There are more effective ways of tackling inequality and poverty.

In the end, others would argue that expanding existing social safety nets would be a better solution to inequality and poverty.

It’s difficult to say whether this would be a better solution, or whether a UBI program would be effective at alleviating poverty, as results vary between trials, experiments, and borders. The reality is that while it’s difficult to scale conclusions from these studies up to a nationwide or even state level, the discussion around UBI is a timely and important reminder to politicians to reconsider our nation’s existing relationship with the welfare state and automation.