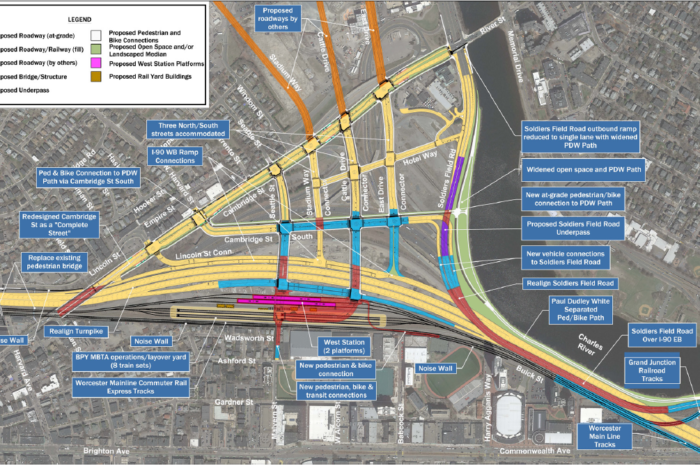 This originally appeared in the Boston Globe. Authored by Mary Z. Connaughton and James Aloisi.

As part of the state’s $1 billion reconfiguration of the Massachusetts Turnpike in Allston, Transportation Secretary Stephanie Pollack recently announced that a narrow strip of land known as “the throat,” will be considered for an at-grade option in addition to a proposal to rebuild the highway viaduct by Boston University. Yet concerns remain about the deeper commuter impact of the highway viaduct option during the proposed project’s six-to-10-year construction.

When MassDOT previously presented a plan that included elevating Soldiers Field Road, a primary objection was commuter rail service disruption. Public opposition poured in, much of it focused on the plan’s impact on the Charles River and on commuters during construction. MassDOT consultants explained that the Worcester line would be limited to a single track for about five years, and there might be no service on the line during parts of the construction period.

In a June MassDOT board meeting, staff announced the new highway viaduct option noting that such an approach would have the effect of “largely maintaining Worcester main line 2 track operations” during construction. Yet at a project task force meeting that same evening, a MassDOT consultant responded negatively when asked if operating both tracks was possible throughout construction of the highway viaduct plan, later adding that under none of the alternatives could two-track service be maintained.

This summer, MassDOT issued a project scoping summary report stating, “the design-builder may be required to reduce mainline service to a single track.” The maintenance of reasonable commuter mobility during construction must not be left to contractors. Contract requirements should mandate at least six lanes of turnpike and two tracks of rail service at all times.

Post-pandemic, MetroWest and Central Massachusetts residents will return to using the turnpike and commuter rail. They need assurances that the option chosen will minimize commuter disruption and avoid interrupting two-track service during construction. Before final decisions are made, MassDOT should make construction phasing plans available for all options under consideration to allow for meaningful public input.

With turnpike lane reductions and work-zone slow orders, congestion during the multi-year project will no doubt approach the unbearable, and commuter rail must be a viable option — not a weak alternative. Limiting rail service is a recipe for more congestion, regional inequality, and air pollution. At a time when we have evidence that long-term exposure to auto exhaust makes people more vulnerable to COVID-19, any option that reduces commuter rail ridership borders on irresponsible.

Before the pandemic, the Worcester branch was one of the fastest growing commuter lines. The MBTA had improved the line’s infrastructure and made single track service in Allston a bad, distant memory for commuters. Bringing single track service back to Allston in any form would be a major setback and an untimely disincentive for people to ride commuter rail.

Significant improvements in capacity and frequency of passenger rail service are needed to maintain mobility and avoid significant spillover traffic in Newton, Brookline, Cambridge, and Allston during construction. These include Back Bay Station platform improvements, new rail signals in the Back Bay to South Station area, and initiation of two-track shuttle service for West Station, Kendall Square, and North Station to avoid overcrowding at South Station.

Stations in Newton, Wellesley, Natick, Framingham, and Worcester need high-level platforms to reduce dwell time and improve service quality. More park and ride opportunities at route 495 and a new regional station at route 128 would serve residents well. These and other initiatives must be considered, evaluated, and committed to during finalization of the project’s Environmental Impact Statement. Finally, Worcester line at-grade crossings in Framingham and points west snarl traffic. MassDOT should commit to a plan to mitigate those stress points.

MetroWest and Worcester-area residents deserve more frequent and reliable intercity rail service both during construction and thereafter. Massachusetts deserves transportation planning and policy that reflects the needs and values of our times.

Senate President Karen Spilka has made it clear that, among other things, maintaining two-track service and increasing public transportation capacity to maintain commuter mobility during construction is a must for this project. Any option that fails to do so should be rejected.